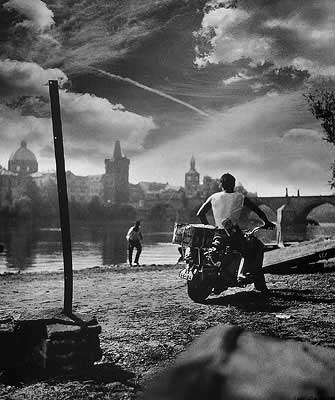 [1]
all comments  CZ comments only  EN comments only
[1] irv Thomas | 12.11.2007
Actually, it was this one, without color, that first attracted me to your work. I've always thought it a marvelous photo, hard to believe the clouds were real (but don't tell me they weren't). And I do think it is better in black and white. Thanks for your site.
[2] Klaus | 12.09.2008
Compare these clouds with clouds from David, Lonely Forever, 1969 ;)
[3] Bent Wrongly | 08.09.2009
I like this photo. Makes me wonder what the relationship is between the gentleman on the motorscooter and the person walking near the water. And the sky is very dramatic. The last time I saw a sky like that it was in the 1980's film Flash Gordon. Max Von Sydow played Ming the Merciless, and boy was he. He was likable though...as much as you can like a sadistic space tyrant. The girl in that film was very pretty. She's surely much older now. Funny...the older we get, the more we crave french fries...or has noone else noticed that phenomenon?